My A-Z of pipe tobacco

Published by Calum UnderUncategorised on June 2, 2020

As I’ve said a whole bunch of times, there’s an insane amount of pipe tobacco brands available, even with the UK’s notoriously strict limits on what is available. The choice is daunting and it can be difficult to even decide where to start. So over the coming weeks and months (maybe even years… like I said: there’s a LOT of choice) I’m going to be going through the available brands of tobacco in alphabetical order and looking at each one in a little more depth, along with reviews of some of their blends (or all of them, if they only have a few.)

So, I’m kicking it off with “The remarkable Dane:” Alsbo.

As their tagline -The Remarkable Dane – implies, Alsbo is a Scandinavian style, aromatic range. Stylistically, Scandinavian Aros differ slightly from American ones and massively from English ones. English aromatics are usually more full bodied and powered by “Spice” tobaccos, such as Latakia and Perique. American Aromatics meanwhile, are much milder tobacco-wise and use flavoured “casings” to achieve a specific taste and aroma, such as vanilla or various fruit. On this scale, Scandinavian aromatics are much closer to American ones, in that they use casing rather than spices, but they tend to go a little lighter on the casing. This results in a more subtle taste that also allows the natural taste of the tobacco to shine through. Alsbo is a great representation of this style and they have been producing tobacco and refining their skills for over one hundred years.  Their range features three blends: Black, Sungold (Vanilla) and Ruby (Cherry.) 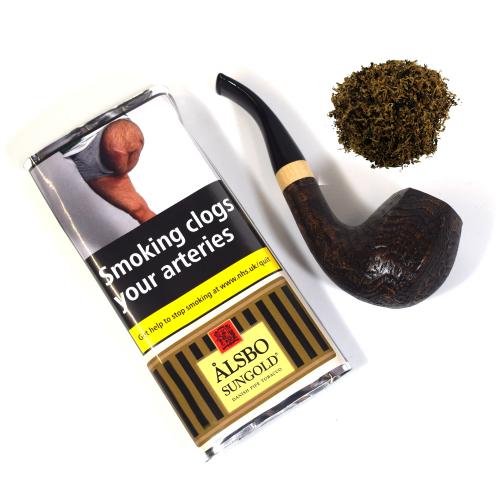 I’ll probably say this a million times over the course of my life, but there’s something about the combination of tobacco and vanilla that just works and Alsbo Sungold is no exception. However, the risk with such a successful combo is an increased chance of getting lost amongst the competition when there are so many options available. Alsbo must be doing something right though as they have always stood out as one of the more popular vanilla-based options for pipe smokers. For me, the thing that makes them stand out is their unique choice of extremely mild tobaccos, which means they can also use a deliciously delicate vanilla casing, without risk of losing the taste under the flavour of the tobacco. When so many cased tobaccos just bombard your sweet tooth, the fact Sungold uses a more subtle and crisp vanilla flavour, combined with mild and ever so slightly sweet tobacco, really helps it stand out from the bustling crowd. 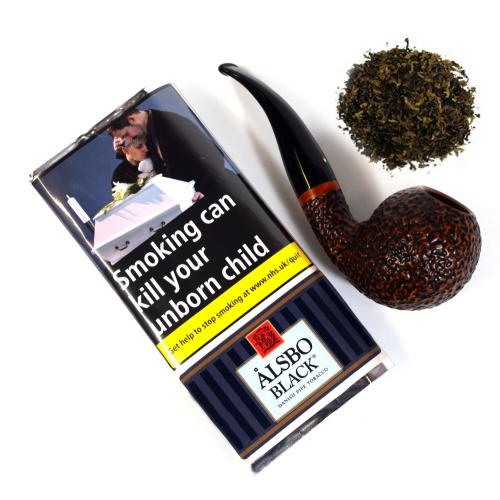 Even before we (as a nation) had to swap to using colour-coded names to describe flavours, Alsbo Black was always called Alsbo Black. So it has never actually been named by an “official” flavour. So, what is it? In an interesting choice, the casing used for Alsbo Black is… Vanilla… again. OK, OK, I’m being slightly facetious here, as the original packaging description lists Black as having a “Vanilla and Hazelnut” casing. So, it isn’t just the same flavour again, but it’s always struck me as a slightly odd choice. Just to add to the oddness; despite the name, Alsbo Black is primarily a mid-brown colour, with flecks of black throughout, in a relatively fine-cut shag. All concerns about weirdness (not that I mind things being weird, personally, I’m all about that) will immediately go up in smoke when lighting a bowl (GEDDIT?!)  however, as this blend is both delicious enough and different enough from Sungold just justify its eccentricities. The extra elements to the casing give it a much deeper, richer taste than the Sungold, while still being reserved enough to not compromise the tobacco taste. It also has a nice amount of room for the flavour to develop as you smoke and it sometimes starts to veer into cream and caramel territory; sweet and satisfying but never sickly. The fine cut of the shag also makes it extremely easy to light and keep lit; perfect as an all-day puffer.

The only thing that is on the same level of popularity as a tobacco flavour as vanilla is cherry. So, it should come as no surprise that Alsbo’s third and final flavour option is cherry. As is the case with Sungold, Alsbo have once again achieved the seemingly impossible by having a cherry flavour that stands out as popular in such a hotly contested position. Once again, they achieve this by taking the road less travelled. Most cherry flavour tobacco blends tend to go down the tried and tested “Black Cherry” route: A very sweet and rich type of cherry flavouring, like you might find in a bake well tart or similar. Alsbo Ruby, on the other hand, goes for a much more fresh and tangy version of cherry, making for a more refreshing and less sickly smoke. Definitely worth a try, especially if you already know you like cherry blends but fancy a change of pace.

So all in all, I’d say Alsbo is a great representative for the Scandinavian style of aromatic tobacco, while simultaneously having enough individual character to make it stand out from the competition. Well worth a try, either as in introduction to the style or as a change of pace from similar blends. If you pick up a packet, don’t forget: we love to hear what you think, so drop a review in the comments or via social media!